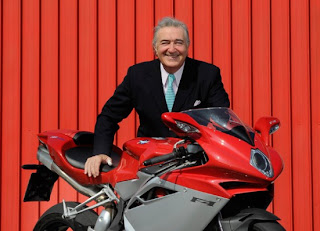 Founder of Cagiva, former owner of Ducati and the man who revived MV Agusta, Claudio Castiglioni passed away in Varese this morning after battling an unspecified illness. Responsible for bringing two of the most beautiful motorcycles ever — the Ducati 916 and MV Agusta F4 — to market, Castiglioni was viewed both as a savior and an incredibly cunning businessman. His most recent triumph came just last year, when Harley-Davidson paid him €20 million to take MV Agusta off their hands just two years after he’d sold it to them for €70 million. The deal made possible the two greatest MVs ever, the current F4 and Brutale, as well as the new MV Agusta F3. When the lightest, most sophisticated supersport motorcycle ever goes on sale later this year, it’ll serve as a fitting remembrance for one of the most passionate men in motorcycling.Post from Hell for Leather!